The state that played host to Thomas Edison’s first movie production house will soon be home to another film facility as a $125 million investment is coming soon to Newark’s South Ward.

Great Point Studios, a studio management business specializing in film and television infrastructure, has announced a partnership with the New Jersey Performing Arts Center to build a major television and film production studio called Lionsgate Studio Newark. The facility will be owned and operated by Great Point Studios and Lionsgate will be receiving naming rights under the announced deal.

The endeavor will revitalize 12 acres of the former Seth Boyden public housing complex. Jersey Digs has been following the redevelopment effort for almost two years was the first outlet to report on the possibility of a movie studio coming to the site last fall.

Great Point Studios is a joint venture with an affiliate of Lindsay Goldberg, a private investment firm. Matrix Development will serve as the project developer and San Francisco-based Gensler, a global architecture firm, has signed on to provide architecture and master planning. Operations are expected to begin in late 2024.

“One of my administration’s priorities has been to enhance New Jersey’s film industry and create new revenue streams for our State,” Governor Murphy said when announcing the deal. “With the addition of the Lionsgate Newark Studio, New Jersey will cement its position as a hub for television and film production with its proximity to all forms of transportation and access to more than 14,000 qualified union members in the region.”

Great Point Studios is slated to span 300,000 square feet and include production stages ranging from 20,000 to 30,000 square feet. Offices, support space, and parking for 400 cars and 65 trucks will be included within the facility, which is slated to provide grip, electric, equipment, props, set building, restaurants, location catering, cleaning service, and security on site.

Besides the formal construction of the studio, the developers anticipate the facility will create more than 600 new long-term jobs when completed. Priority for positions will be given to residents of Newark, a point the city’s mayor highlighted in a statement about the project.

“Bringing a project of this magnitude into Newark is a monumental victory for our city,” said Newark Mayor Ras Baraka. “It will bring hundreds of new jobs, create new educational opportunities for our students, and invigorate the revitalization of the South Ward.”

The announcement of the Newark development follows Lionsgate Studios’ opening of a 500,000-square-foot film and television production studio in downtown Yonkers earlier this year. The company did not provide a timeline as to when formal construction could begin at the property, which saw demolition of the former housing facilities begin last fall.

The Newark project is the latest film production facility to emerge in the Garden State following the approval of the New Jersey Film & Digital Media Tax Credit. Just weeks ago, Bayonne approved a 1.5 million square foot film production studio and Netflix has indicated interest in developing a film studio at Fort Monmouth.

Jersey City’s Cinelease Studio, the largest such facility in the state, opened last summer and a wide variety of Hollywood productions have shot scenes throughout New Jersey over the last two years. 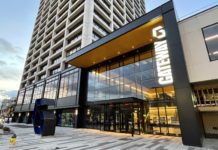