A feud between two bike sharing services has come to an end as two of Hudson county’s cities will both start featuring Citi Bike services later this year.

Hoboken Mayor Ravi Bhalla and Jersey City Mayor Steve Fulop recently announced that Citi Bike has been selected as the bike share provider in both cities. Hoboken currently hosts 30 stations from competitor Hudson Bike Share that will be replaced with Citi Bike docks starting in the fall.

“I am thrilled that Hoboken will be joining Jersey City in upgrading our bike share system to Citi Bike,” said Mayor Bhalla. “This system will provide an integrated transportation option between Hoboken and Jersey City that is safe, affordable and convenient for residents, which is especially critical during the COVID-19 pandemic.”

Jersey City has utilized Citi Bike as their bike share operator since 2015 and will see some improvements to their current system under the deal. The company will be making upgrades to the 51 existing Citi Bike stations throughout the city and will be adding two new stations to the south side later this year.

“It’s a pivotal moment as we work to foster safer and healthier solutions to the unprecedented challenges we’re currently facing due to the pandemic, and this bike share partnership is the innovate approach people are looking for to avoid crowded mass transit and opt for a safer, healthier, low-cost, and efficient means of travel,” said Mayor Fulop.

The combined Hoboken-Jersey City bike share system will initially include 800 bikes and 82 stations, making it one of the largest bike share programs in the eastern United States. Citi Bike will further expand Jersey City’s portion of the system during 2021 with 15 new stations and an additional 200 bikes, which will bring the total program buildout to 95 stations and 1,000 bikes.

Besides the new stations, 40% of the bike share’s fleet will consist of pedal-assist electric bikes. Dubbed e-bikes, the technology is currently deployed in New York City and requires riders to pedal as they would a conventional bike in order to activate the electric assist.

The Citi Bike agreement includes a revenue share for both cities, which calls for the even distribution of five percent of annual ridership revenue that’s greater than $2 million. The new program, which will need council approval in both cities, will be interoperable with all existing Citi Bike infrastructure, meaning members of the Hoboken-Jersey City program can rent Citi Bikes in New York City at no additional cost.

Jersey City and Hoboken host about 75 miles of bike lanes between the two and more are in the works. Jersey City is in the process of installing five new miles of protected bike lanes to their streets, work that should wrap by the end of the year. 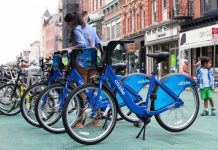