It has been nearly a decade since the plans for Newark’s first “Shaq Tower” were revealed. In the time since, not only were there several false starts, but the historic Science High School building that was supposed to be adaptively reused and serve as the base of the high-rise development was unexpectedly torn down. Now, just as the largely residential project by Shaquille O’Neal and New Brunswick-based Boraie Development is finally nearing completion, plans for an even larger Shaq Tower on a nearby property could soon gain approval.

At an event in April to celebrate the topping-off of the project at the corner of McCarter Highway/Route 21 and Rector Street, a proposal was revealed for a second high-rise development a few blocks south at 769-781 McCarter Highway/Route 21, which stretches between Market Street and Edison Place. During the celebration, O’Neal referred to the proposed $150 million structure as “the house that Shaq built” and told the crowd that he would reside on the building’s top floor.

A legal notice shows that the Newark Plaza Urban Renewal Company, LLC, which is registered out of Boraie Development’s office, is planning for the building to be 33 stories tall and contain 370 residential units. In addition, a “parking structure” and 14,495 square feet of first-floor retail space would be included on the premises, though the plan calls for “fewer parking spaces than are required.” The Newark Central Planning Board is scheduled to hear the proposal for the first time during its meeting on Monday, August 6, at 6:30 p.m.

Located near the Gateway Center and the upcoming Ironside Newark project, the property currently contains a gated private parking lot that was acquired by the developer for $4 million in 2012 from the Newark Housing Authority (NHA). In 2016, the Newark Municipal Council transferred the redevelopment rights to the premises from the NHA to Boraie Development. The NHA received a $750,000 “administrative fee” in return.

For years, signs had been posted at the site advertising an upcoming Boraie Development office and retail building there with up to 500,000 square feet available, but it appears that those plans were scrapped in favor of this project.

This development comes as Boraie Development moves forward with plans to develop some sort of mixed-use project, possibly with up to 200 units, at 930 McCarter Highway and 10-18 Passaic Place along the waterfront. Both properties are owned by the NHA, but are being acquired by Boraie Development for $1.25 million with the City of Newark acting as the middleman in the deal.

Six days after the Shaq Tower topping-off event, Boraie Development Vice President Wasseem Boraie was appointed to the New Jersey State Investment Council by Governor Phil Murphy, who spoke at the celebration. Wasseem Boraie donated $4,300 to Murphy’s campaign last year, according to New Jersey Election Law Enforcement Commission (ELEC) filings, and gave $25,000 this year to the New Jersey Democratic State Committee. Members of the Boraie family have given $292,450 in political contributions to New Jersey officials and parties since the early 1980s, according to the ELEC filings.

A request by Jersey Digs for additional information from Boraie Development was not immediately returned.

O’Neal is not the only celebrity involved in Newark development. We revealed in early 2017 that Queen Latifah, who is also an Essex County native, had partnered with GonSosa Development to construct a 115-unit complex called Rita Gardens along Springfield Avenue in the city’s South Ward. However, the status of the two-building project is currently unclear. 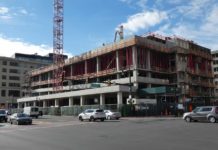 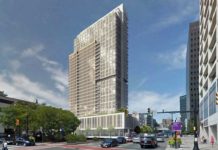