An annual survey has found that a trio of New Jersey towns in different regions of the state all have one thing in common: they have some of the country’s priciest houses.

PropertyShark recently released their rankings of the top 100 priciest zip codes in the U.S. and two Garden State spots made their debut on the list alongside a regular candidate. The company considered all residential transactions that closed this year between January 1 and October 22 when compiling their data, which found that the country’s top 10 most expensive zip codes all have average home sales surpassing $4 million.

New Jersey contributed three zip codes to the top 100, the highest number the state has ever registered. Alpine’s 07620 is once again the priciest zip code in the Garden State, coming in at #58 nationally with an average home sale price of $2 million. Home sale prices were up 38% year-on-year in the tiny Bergen County borough, which has been and continues to be home to various rich and famous types.

Monmouth County’s Sea Girt, or 08750, has the second most expensive homes in the state. The seaside town ranked 70th nationally with home sales averaging $1.89 million during 2021, while 08202 in Cape May County’s Avalon ranked 92nd in the country with home prices averaging $1.67 million. Both zip codes ranked among the 100 most expensive in the country for the first time.

No other New Jersey spots cracked the top 100, but several other towns nonetheless had high average home sale prices. New Vernon clocked in at a $1.62 million average sale price this year, the only town in Morris County to rank in the state’s top 10. Short Hills, an Essex County suburb, ranked fifth at $1.537 million.

In somewhat of a shift, the Jersey Shore dominated the price war over the New York City suburbs. Most of the highest-priced towns in New Jersey were either on a beach or near one, with two of the most expensive zip codes falling in the state’s southernmost county. For the first time ever, the study determined that no NYC zip codes ranked among the 20 priciest in the U.S. this year.

It wasn’t all bad news for the Big Apple, however. The Hamptons zip code of 11962 in Sagaponack was the #3 most expensive in the U.S. and New York overall still had 17 zip codes rank on the list, the second-most of any state in the country.

The country’s most expansive zip code was Atherton, California’s 94027, which clocked in at a whopping $7.5 million average home sale price this year. The Golden State accounted for 70% of the priciest housing markets in the country, with 37% concentrated in the Bay Area alone. 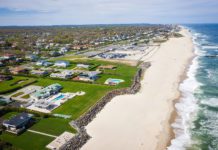 These New Jersey Towns Rank Among Top 100 For Priciest Homes in U.S. 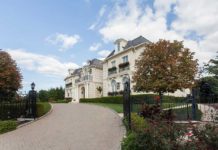