A property that’s been a staple on Bravo’s The Real Housewives of New Jersey has officially hit the open market, as a buyer is being sought for the expansive 16-room house.

Last week, Teresa Giudice listed her 9,765-square foot mansion with Michelle Pais of Signature Realty NJ. Built in 2008 on 3.7 acres of land in the Towaco section of Montville, the home is tucked away in a wooded area and set back significantly from the street.

Featuring stone and stucco on the exterior, guests are welcomed into the two-story home by an expansive great room that comes complete with a “Cinderella staircase,” soaring ceilings, and a wood-burning fireplace. The home’s gourmet kitchen features a large granite island, a suite of high-end appliances, a pot filler, and a butler’s pantry that leads to a private wine cellar.

The mansion includes five bathrooms plus a half bath and sports six bedrooms on the second floor. The home’s master suite features three walk-in closets and a plush dressing room illuminated by a chandelier. Other amenities of the master suite include a gas fireplace, a private balcony, a sitting area, and an ensuite bath finished with a Jacuzzi.

Other areas of the home include a large recreation room, a gym, a home office, and a maid’s quarters. Both a three-car attached garage and a two-car detached garage are featured at the mansion and the property’s yard includes a heated in-ground pool, a fountain, and lots of greenery. The home’s property taxes will set you back $44,431/year.

People reported that Teresa Giudice finalized her divorce from her husband, Joe, earlier this month. The former couple lived in the Montville home with their children for much of their run on The Real Housewives of New Jersey, which has been on the air since 2009.

The pair were indicted by state officials in 2013 over various fraud allegations and both ended up being sentenced to prison just about two years later.

The former couple has tried to sell their Montville house before; back in September 2014, the property was listed for sale at just under $4 million. The price was slashed by $1 million in January 2015, but the property never changed hands and the listing was removed that April. 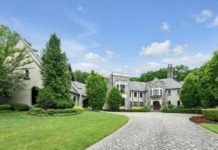